If time is relative, then you might as well walk backwards and think you are traveling back in time. 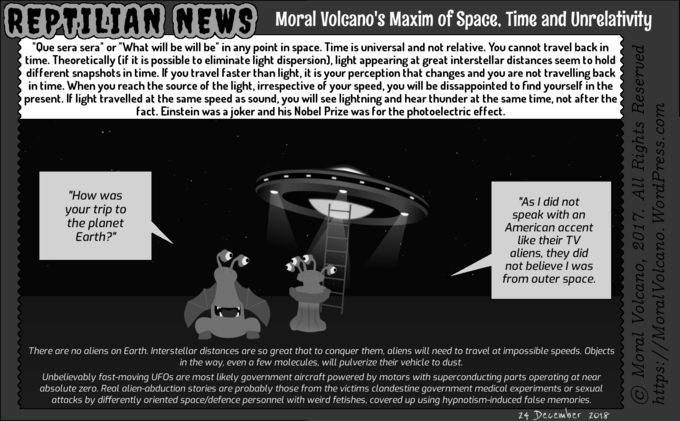 “Que sera sera” or “What will be will be” in any point in space. Time is universal and not relative. You cannot travel back in time. Theoretically (if it is possible to eliminate light dispersion), light appearing at great interstellar distances seem to hold different snapshots in time. If you travel faster than light, it is your perception that changes and you are not travelling back in time. When you reach the source of the light, irrespective of your speed, you will be dissappointed to find yourself in the present. If light travelled at the same speed as sound, you will see lightning and hear thunder at the same time, not after the fact. Einstein was a joker and his Nobel Prize was for the photoelectric effect.

There are no aliens on Earth. Interstellar distances are so great that to conquer them, aliens will need to travel at impossible speeds. Objects in the way, even a few molecules, will pulverize their vehicle to dust.

Feku is 100% FAKE. Nothing about him is original.

After BJP’s defeat in Karnataka, Airnoob refused to accept the reality and started raving in denial

BJP loses foor test and their CM candidate cries and resigns but Republic TV says Congress is in a fix! BJP tried to poach MLAs and form government, but when they failed Republic TV claims they have won the moral high ground!

Guest: No they are not.

Airnoob: Then, why aren’t they rushing to the Raj Bhavan to form the government?

Guest: They will… later maybe

Airnoob: With only 38 MLAs they are going to wait outside Raj Bhavan.

Airnoob: BJP has outfoxed the Congress.

Arnab Goswami was not willing to accept the reality. He remained in denial all day on the day of the results.

I counted 4 “R.”s and 8 “Republic”s among 21 onscreen texts on Republic TV news channel. 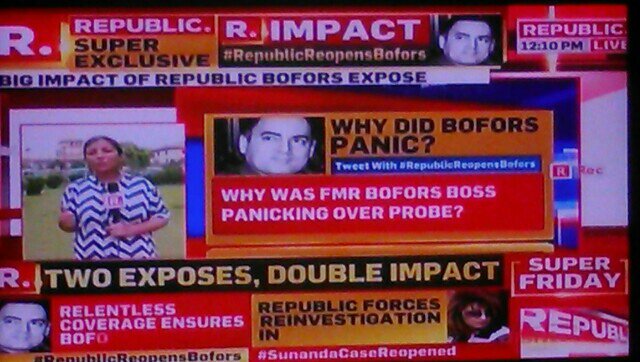 And, instead blames paranoia on the part of Congress for moving MLAs out of Gujarat.

It is also fascinating how Nitish Kumar’s government transformed itself from one opposed to the BJP to one supported by it within the space of a week’.

Mainstream media turns a blind eye to MLA horsetrading in so many states after elections. BJP failed to win majority seats but still managed to form government.

When will these channels be banned, the Nation wants to know?

Watchig Republic TV is like watching a bunch of street dogs barking at each other. It should be banned considering the deleterious effect it has on other channels which are forced to attempt the same.

Times Now was previously the worst news channel on TV. Now it has a competitor in the form of Republic TV, led by the same loudmouth Arnab Goswami. Media-buying agencies seem to be driving news channels stark raving mad. In order to retain maximum attention, the news channels dump all headlines on to the screen, which scream on to the screen, flash for a few seconds and disappear without a trace. Most of the time, there is no relation to the current news and the headlines floating all over the screen. With the launch of the new channel Republic, the madness continues.

Last year, I read online that Times Now had gone crazy with their burning issue thing. I did not immediately know what it meant. Some days later, I saw it for real on TV. They literally had Navika Kumar burning amidst graphics of flames all over the screen. To drive the point further, they was also a title “burning issue.” While it is “headlines” or “breaking news” for other channels, for Times Now it was “burning issue”, as if trying to sear it into our memories. The unabashed crudeness did not seem to have struck anyone in the Times Now crew.

So, What do you need to run a TV news channels?

On this stupid republic TV, they may talk all the time about some big issue but that’s not the big issue. Main issue is Republic TV. Can you count how many times it is mentioned on the screen?

I hate to say it but why can’t Indian news channels learn something from foreign news channels? Of course, their judgement is just as impaired but their production values are much better. The journalist on the ground is not trying to shout all the way from the studio. The anchor, usually, is calmness-personified, not a nervous breathless jerk.

CNN offers advice to snowflakes psychologically injured by the news of Trump victory and Hillary loss.

Does it have to be so crappy?

Clips from Indian TV news channels making questionable viewership claims all the while trying to provoke war with Pakistan.

Every Indian news channel is suffering from the same syndrome. They are copying the worst from each other. On my DTH connection, I use the a la carte option and I don’t have Times New anymore. Instead, there is the free India Today channel. It is just like Times Now. Coverage on J&K is so bad that people there may soon have more beef against TV channels than against the Army. (Viewer discretion advised; The Friday Times; http://www.thefridaytimes.com/tft/viewer-discretion-advised/)

This is all because of foreign-owned media-buying and TV-rating agencies. They want all advertising money to go to pet online properties owned by globalist reptilians. The long-term plan is to destroy traditional media in favour of closed-garden media shops.

Like hungry dogs fighting over a bone, Indian TV channels are being made to throw away all rules. Look at the online hashtags created by them – #MakePakPay & #BarbaricPak. These same media orgs have print newspapers. This sort of fight for crumbs does not exist there – although media rating agencies have tried to mess there to. In fact, with newspaper reader surveys they tried to initiate this sort of dog-eat-dog competition among newspapers. The tactic used is always the same – the beneficiary of the survey or that ratings tally is the leader. This makes it easier to starve and destroy the rest. Fortunately, for the Indian print media, this was not a problem, as readership has been increasing for all players. For TV companies, it has not been good because there are no reliable numbers on who is watching which channel. DTH companies would be able to reliable rating numbers if they provided a la carte options but many news channels are safely bundled with other channels so that any kind of audience measurement is impossible.

Arnab Goswami beheads ISIS and presents them a fate worse than death.

Arnab Goswami beheads ISIS and presents them a fate worse than death.

I improved this a bit:

These were created by others. 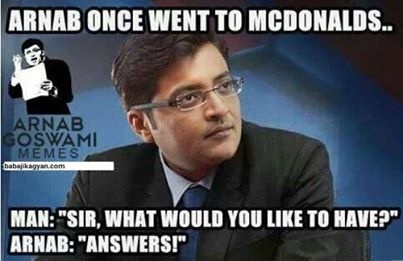 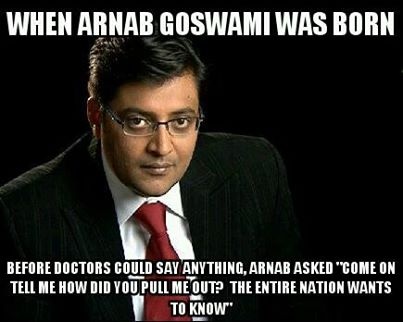 An Arnab is born.

These executions are of course staged and are meant for propaganda purposes but at least we won’t have to see them again on TV.

The road to hell is paved with good intentions.