Save your tears for Modi! He is not the poor possum he claims to be!

The Wire reports that, contrary to his claims of being a chaiwallah onc, Modi for a while managed a canteen owned by his uncle. Further destroying his supposed brotherhood with chaiwallahs, UP government evicted chaiwallahs from BHU campaus before Modi’s visits because they thought chaiwallahs represented a threat to Modi (https://thewire.in/203797/defective-tea-kettle-dead-sabarmati/).

Modi asks critics of his high-speed bullet trains to ride on bullock carts.

Sheesh! The way Modi is crying around the last few days has been disgusting. Won’t they be stealing the elections this time too? Why does he become so paranoid around election time? Does he think his handlers will abandon him this time?

A Bihar-like grand alliance in the form of DMK+PMK+Left+Congress+DMDK would have been necessary to tip the balance against AIADMK. But EVMs supplied by Rothschild-controlled companies will fix the result in favour of the DMK or DMKDK alliance.

Thanks to the many “Amma” schemes, the restoration of law & order and the return of a more tolerable political environment, AIADMK has to win. Realising this, AIADMK has choosen to go it alone in this election. DMK’s voter share has remained static while AIADMK has increased. AIADMK is poised to win because opposition vote is going to be split in the six-cornered fight. But Indian Election Commission uses voting machines with chips made by foreign companies. The EVMs will elect somebody else. When Rothschild voting machines want to pick a different candidate the real winner of the election, they manufacture a close race results such as 51-to-49 tallies seen in US and Europe. We might see similar outcomes when the results are declared.

DMK spent a huge amount of money in the previous elections and lost. They have to win this time. They will repeat what they did to the voting machines to make P Chidambaram win in Sivagangai. That sea-saw election counting is without doubt in anybody’s mind the result of tampering of the voting machines. The same tactic will have to be repeated all over the state and that is what they must be spend their money on this time. As Josef Stalin said, it does not matter who votes but who counts it and how. (http://lib.ru/MEMUARY/BAZHANOW/stalin.txt). DMK did not even bother with a manifesto.

They stole it from PMK who had the best one in terms of useful and viable ideas. Tamil people are not unaware that PMK has some LTTE baggage. PMK has also been sympathetic to all kinds of terrorists and troublemakers like Veerappan. They have even wanted that the state be split the state as their support base is concentrated in some pockets in the North. 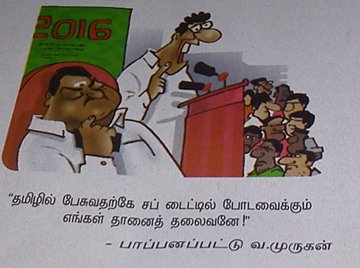 Vijaykanth-led DMDMK’s success in the last election was because of its alliance with the AIADMK, not because of any sudden surge in its popularity. The Caravan magazine refers to TheNewsMinute.com capping DMDMK vote share at 3 per cent. Even a senior politician like Vaiko has not understood this and inexplicably allowed his own MDMK party become a junior partner in the பாண்டவர் alliance. This is surprising because allegations that Vijaykanth is a drunkard have gained credence thanks to his awkward appearances and non-stop stream of gaffes. Maybe it is a tactic to limit loses on his party and have others shoulder the ignominy in case of a wipeout. If the alliance wins, he would still be in an influential position, as the architect behind the alliance. It may have been a smart move after all.

Thanthi TV’s election coverage comedy makes fun of Vijaykanth losing count of members of his coalition and then his awkward மழுப்புதல்.

Open magazine thinks Jaya is invincible. They attribute some loss of popularity because of the prohibition controversy. Prohibition was lifted by Karunanidhi decades ago when he was chief minister. Like politicians in other parties, he joined the “Bring back prohibition” bandwagon after the movement found popular grassroots support. Jayalalitha let the air out of everyone’s sails by promising a gradual and complete prohibition. 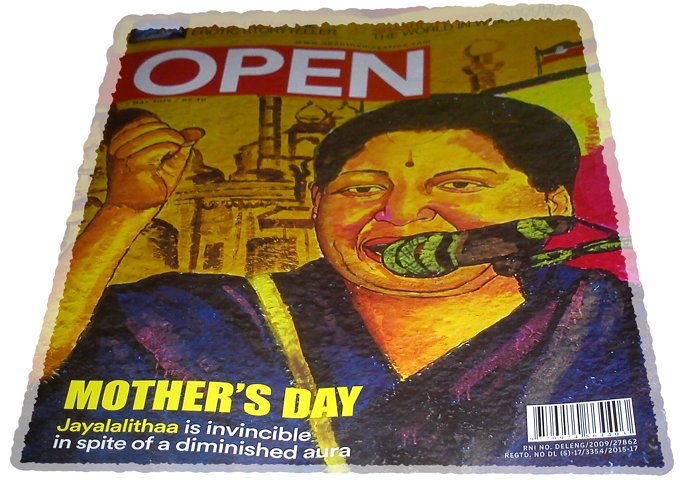 Other கோஷ்டிs such as those from BJP, Thirumavalavan and director Seeman will have to lose their deposits. But, Rothschild voting machines may have other ideas. They may be thrown some crumbs. You never know when these tin-can operations will be useful.

Election coverage on TV also includes comedy shows like this. They are extremely funny but the shows by the DMK channel and actual statements made by candidates/campaigners themselves sometimes tend to be get too crass for comfort.

Otherwise, it will be seen as a defeat against those fighting corruption.

My guess is that the EVMs will be voting for the Congress a third time. BJP will improve its tally. Modi bugbear will keep off most voters. The final races will be tight and BJP will be mollified. Advani will be out and Modi will be crowned as BJP chief to be the PM next time.

Seen how oldish-looking Sonia Gandhi has suddenly become? She has been chipped the last time she went to the US for surgery.

All those who get chipped become grey pretty fast. Famous examples include George ‘Dubya’ Bush and Barack Obama.